Today, I am hosting an author interview post with Chad Hunter as part of The Monster Man book tour hosted by Goddess Fish Promotions. The Monster Man is a horror/thriller story released fall 2014 from indie.

Chad will be giving away a Monster Man package with a signed copy of the book, signed original artwork and several Monster Man related products from Zazzle.com (e.g. keychains, coffee cup, etc) to a randomly drawn commenter via rafflecopter. Be sure to follow the tour and comment; the more you comment, the better your chances of winning.

A brief summary of the Monster Man – King of Fools – Damian Malachi is a best-selling horror writer.  He is also a loving husband and dedicated father.  However, Malachi holds a dark secret.  Twenty years ago, as a young boy, he disappeared for two days.  His parents and police searched for the lost child only to have him reappear at the front door of his home with unexplainable scars, a slight amount of growth and a sense of tragedy behind his eyes.  What no one knows is that in the forty-eight hour absence, Damian experienced five years in the colorless world of Sanctuary, a place much like our own world exceptthe monsters that we have seen in black-and-white movies and books are real.  More than that, the monsters in Sanctuary had won.  Mankind was extinct. 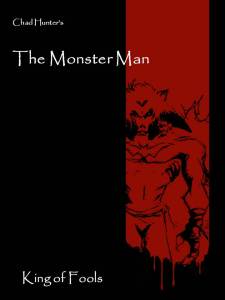 In Sanctuary, Malachi discovered a dark prophecy – One of the five green shards of a crystal, the Walestone, enabled him to tap into the stone’s other five recipients – the lumbering Frankenstein’s Monster, the savage Werewolf, the feral Swamp Creature, theenigmatic Mummy and the tyrannical Dracula.  Trained by the poetic and repentant Igor and the now-vampiric Dr. Van Helsing, Malachi became the Monster Man – a chimera of all the monsters and their greatest threat.  After a brief war, Damian returned home and grew up knowing that the old movies and books were not fiction but warnings.  And now, two decades later, in Malachi’s own world, the war with horror has begun again.  Three boys have gone missing in the exact same fashion as Damian did when he was a child.  Additionally, creatures have found their way into Malachi’s home, threatening his wife and son.  Now, Damian must go back to the world that stole him away once and never left him the same.

How much of a story did you have in mind before you started writing THE MONSTER MAN?

I probably had the beginning, middle and the end in mind.  I did not know the exact details of the twists and turns that would unfold as I wrote the book’s final draft.  But I had the most important thing to me as an author; I had the feel – the vibe – that I wanted.  The Monster Man – King of Fools, by the time I started pounding the keyboard, had the mixture I’d envisioned and hoped for – classic yet fresh, dark yet inspiring, respectfully referential while being entirely original and self-encapsulating.

What is your favorite scene in the book?

Ungh!  Just one?  That’s a tough question because I really do enjoy the book as a reader when I look over it.  I think the scene of Van Helsing, Igor and the Gypsy making their stand against the Five as a young Damian runs for his life.  There is something redemptive about their acceptance of what could be their last moments.  It’s like for one moment, they can be heroes again and in their potential sacrifices, they can teach a boy about greater good.  The scene where Damian says goodbye to Elsa before returning to Sanctuary is a favorite.  The dialogue, the emotion in that scene feels very real to me.  They are a real couple and they are facing the supernatural with great natural foundations.

Of the five other shard recipients, Frankenstein’s Monster, Werewolf, Swamp Creature, Mummy and Dracula, which is your favorite monster and why?

Hard question!  They are all my favorites in their own way; they all have a style and a vibe that makes them key to the lore of The Monster Man.  But if I had to pick, I’d pick Dracula.  As a vampire or THE vampire, so much of what he is and does is defined by a struggle to stay alive, a drive for immortality and the limitations of his supernatural nature.  Yet, with the Walestone shard removing that, you get a creature that has nothing to fear essentially and while they may empower him, it has left Dracula bored, unchallenged and wanting for true battle.  He is a warlord but what is a warrior who enters battles with certain outcomes?  It’s the presence of Damian and his powers that ignites Dracula beyond the cape and fangs but into a foe that desires a final outcome, no matter how devastating.  That angle makes him a boundless character to dive into.

Funny, because when I write, I see the book in movie form.  Our son was (and still is) a fan of the kids show “The Fresh Beat Band” so it was on a lot while I was writing.  The character of Damian would be played by Thomas Hobson (from the Fresh Beat Band), his wife Elsa would be played by Yvette Nacer-Gonzalez.  I would cast Jeremy Irons as Dr. Van Helsing and Dracula would be portrayed by Goran Višnjić from ER.  Everyone else would be the director and producer’s picks.

How important are names to you in your books? Do you choose the names based on liking the way it sounds or the meaning?

Names are huge.  You have to have names that stir images, emotions, characteristics in you every time you type them.  I choose names based on how they feel.  For The Monster Man – King of Fools, almost all the names tie into classic and modern horror in literature or film.  For name choosing, I just go with a letter that “feels” like the character and then I will look at books or magazines for names and see if anything connects.  It’s a very intuitive process.

Is there any particular author or book that influenced you, in any way, either growing up or as an adult?

Bradbury for his ability to defy the rules and use run-on’s as a painter would a wide brush.  Poe for his verses and rhymes.  Angelou for the strength and impact of her word selection and interaction.

What writing advice do you have for other aspiring authors?

Identify your writing goals and stick to them.  Want to write a novel and keep it in the attic?  Fine.  Do it.  Want to write a novel and publish it to the world?  Fine.  Do it.  And never let anything tell you your goals are impossible.  Surround yourself with people who inspire you and believe in you and who compliment your skill set.  And always believe in what you are doing.

What are you working on now? What is your next project?

The rough draft of the second Monster Man novel; my first full graphic novel comic and a Black Parakeets Christmas book for children.

The Count’s eyes burned, his teeth grit and blood and drool ran from his mouth.  There was a hellish fury in his eyes as he pressed down on the sword’s hilt.

The Monster Man suddenly dropped into a gust of fog.  Dracula’s sword bit down into the castle flooring.  Malachi reappeared at the large circular stained glass window.

The vampire looked up and hissed at the Savior of Sanctuary, perched in the window’s seal.  The transformed Damian frowned.

“I…swear to you…” Dracula hissed, “You and I WILL do battle!”

Malachi nodded and his lupine eyes simmered.  “Then it begins.”  And he erupted into a burst of fog and shot out of the castle’s windows.  Thousands of reflective triangles danced in the Sanctuary night.

Dracula, still fixated on the broken glass, reached under his billowing cape.  He held up torn pages in his claws; pages that appeared to belong to the book of Van Helsing now in the possession of his long-dead enemy’s protégé.

Dracula lowered his head back and screamed into the night.

Chad Hunter was born in East Chicago, Indiana. Raised by a single mother in the city’s Harbor section, he is the youngest of four. Growing up in the Midwest and a proudly self-proclaimed “Region Rat,” Hunter has written and published several books and novels. He has written for magazines and newspapers throughout North America and has been published in several languages. His writings have been called sophisticated yet humorous, sharp witted and unrelenting.

Most often, Hunter’s writings have been considered so wide and diverse that they span a scale that would include multiple writers with multiple forms.

How To Lists from the Innerwife intimately discusses the subtle internal conversations that can greatly improve relationships.

Black Parakeets Only Hatch in December walks readers with poetic imagery through a lifetime in East Chicago, Indiana.

Finally, The Portray Protocols grip with horrific vivid detail, supernatural terror and mesmerizing intensity. If anything binds his varied styles, it is Hunter’s theme of the human condition, humor and family closeness – all to the backdrop of romantic love, vibrant remembrance and even monsters themselves.

2 responses to “Author Interview and Giveaway: THE MONSTER MAN by Chad Hunter”

Thanks for Your Support.

I earn a small commission if you purchase a product or service using the Amazon, Audible, Groupon, The Book Depository, or Smashwords links or banners on my site.