Today is release day for Catwalk by Sheila Webster Boneham, book 3 in Midnight Ink’s wildly popular animal cozy mystery series. I hope that you enjoy the interview as much as I did.

Agility can be murder for cats, dogs, and people!

Animal photographer Janet MacPhail is training for her cat Leo’s first feline agility trial when she gets a frantic call about a “kidnapping.” When Janet and her Australian Shepherd Jay set out to track down the missing party, they quickly find themselves drawn into the volatile politics of feral cat colonies and endangered wetlands.

Janet is crazy busy trying to keep up with her mom’s nursing-home romance, her own relationship with Tom, and upcoming agility trials with Jay and Leo. But the discovery of a body on the canine competition course stops the participants dead in their tracks—and sets Janet on the trail of a killer.

1. How much of a story did you have in mind before you started writing Catwalk?

Not much! I knew I wanted to focus on feline agility, and on feral cats, but I had not victim, no killer, obviously no motive…. I did have the on-going series threads—Janet MacPhail, my protagonist, is dealing with her mother’s dementia and with her mixed emotions about her love affair with Tom. Other characters also have on-going stories—Janet’s neighbor and best friend, Goldie Sunshine, has had some health issues since the first book, Drop Dead on Recall, and several other characters are developing in their own ways. I’m always fascinated by the unfolding of a story, and how characters and plot twists develop organically from the writing process.

2. What about your characters surprised you while writing the book?

Oh, those little devils surprise me constantly. They say and do things I don’t expect, and they walk into view from…who knows where? In Catwalk, I remember very clearly writing the scene in which an unpleasant character is holding forth, and a spouse I didn’t know about walks in. I wrote the scene and then sat back and thought, “Hunh. I didn’t even know you were married!”

3. What is your favorite scene in Catwalk?

Without offering a spoiler, I think one of my favorites is when the tough cop, Homer Hutchinson, has an emotional epiphany early on. At the beginning of the series, he was afraid of dogs and not too keen on cats. By The Money Bird, Janet’s Australian Shepherd, Jay, has gotten through to him a bit. And then in Catwalk, something happens….

4. Catwalk is the third book in the An Animals in Focus Mystery series. Are there certain characters you would like to go back to, or is there a theme or idea you’d love to work with?

Several characters stick with Janet throughout the series. Her Aussie, Jay, and her orange tabby, Leo, are major characters, of course. So are her romantic interest, Tom Saunders, and his black Labrador Retriever, Drake. Janet’s mother, her friend Goldie, Detective Hutchinson, Giselle Swann and her Maltese, Precious, and a few others recur and develop as time goes by.

Some of the themes throughout the series include the challenges of middle age, romance, parents with health issues, and of course responsible relationships with animals. Each book has Janet focusing on a different animal sport—competition obedience in Drop Dead on Recall, retriever field training in The Money Bird, and both dog and cat agility in Catwalk. Each book also presents a serious issue—breeder ethics in the first book, wildlife trafficking in the second, and feral cats and irresponsible development in book three. These are cozies, so I don’t beat the topics to death, but there is enough information to perhaps pique some readers’ interest in learning more.

5. Rocco’s interview with Jay (Cats, Books, and…More Cats!) had me laughing aloud. How do you come up with the characters’ personalities?

That was a fun interview with Rocco! Leo, my protagcat, was interviewed a couple of years ago, too, at Melissa’s Mocha, and Meows.

Jay and the other animals don’t talk in the books, so getting his voice right took a little experimentation. But all the dogs and cats in the books are based on real dogs that I have either owned or known well, and when I write, I feel them inside me. I don’t know if that makes sense, but it’s how I experience the process. The same is true of the human characters. None of them are “real” people, but of course fictional characters are assembled from the bits we gather in real-life interactions. 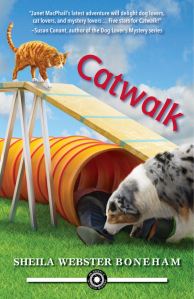 6. Who designed the cover?

I’ve been fortunate in that Midnight Ink has worked with me in designing my covers for the series—authors often have no say at all. The cover for Catwalk was truly a cooperative project—I had an idea, a couple of professional photographers I know through Facebook staged my idea, and the artist and designer at Midnight Ink made it work. I’ve written about that process in more detail in a post called The Making of a Book Cover.

7. What’s your biggest challenge as a writer? How did you overcome it, or how are you working to overcome it?

That’s an interesting question. Before I began writing books, I published a pile of feature articles in magazines, a few academic articles, and other things. I’ve been writing for so long that the writing itself comes very naturally to me, and when I’m really into a project, I get lost in it. I suppose one of my challenges is to remember to step away from the keyboard—to live my life!  I’ve taken to using an interval timer to remind myself to get up and go for a walk—30 minutes writing, 15 walking. I’ve been doing that for a couple of months, and I feel so much better! The exercise breaks don’t break the creative flow, either, because I work out snags or next steps as I walk, and come back ready to write.

8. How did you celebrate the sale of your first book?

Wow—I can’t remember. My first book was nonfiction a nonfiction book titled Breed Rescue: How to Start and Run a Successful Program, published in 1998 by Alpine Publications. I’m proud to say it won a Maxwell Award for nonfiction from the Dog Writers Assoc. of America. It’s out of print now, but was updated and expanded in Rescue Matters! How to Find, Foster, and Rehome Companion Animals, published by Alpine in 2009. I clearly remember getting that first offer and signing the contract, but I don’t remember how we celebrated. Catwalk is my twentieth book, and this one I am celebrating with a launch party at Pomegranate Books in Wilmington, NC.

9. What is something people would be surprised to know about you?

I have a PhD in folklore from Indiana University. My focus was on North African and Middle Eastern cultures, with a particular interest in gender roles. I studied for a time in Egypt, and taught at universities in Tunisia and Kuwait, long before the world went crazy. Oh, and I brought a dog back with me from Tunisia. I had adopted her when a Tunisian friend found her and brought her to me one dark, rainy night.

10. What project are you working on now?

I always have multiple projects in the works, and I write in a literary vein as well as genre fiction. Right now I am wrapping up the fourth Animals in Focus mystery, tentatively titled Shepherd’s Crook. I’m also deep into an environmental thriller, a series of essays, and some poems. One of my essays recently won the Prime Number Magazine Award for Creative Nonfiction. I find that shifting between types of writing keeps me fresh and engaged. Maybe one of these days I’ll figure out what I want to be when I grow up!

, the first in the series, won the Dog Writers Association of America Maxwell Award for Best Fiction Book. She is also the author of 17 nonfiction books, six of which have won major awards from the Dog Writers Association of America and the Cat Writers Association. For the past two decades Boneham has been showing her Australian Shepherds and Labrador Retrievers in various canine sports. She has also bred top-winning Aussies, and founded rescue groups for Aussies and Labs. Boneham holds a doctorate in folklore from Indiana University and resides in Wilmington, N.C.

October 5 – Chloe Gets A Clue – Interview

October 12 – Cozy Up With Kathy – Interview

Thanks for Your Support.

I earn a small commission if you purchase a product or service using the Amazon, Audible, Groupon, The Book Depository, or Smashwords links or banners on my site.